Make 2013 the year you launch your big idea

You know that idea that you've been shelving for the past few months? Or that awesome idea that you had in the shower this morning? It's time to take the next steps with your ideas and announce it to the world this year. How? With Launch Effect, of course!


We made Launch Effect to give people a dead simple way to launch new things. With its no-fuss sharing capabilities, Launch Effect allows you to get people excited about your new venture and go viral.


To get you moving on the right track in 2013, we're giving away some cool prizes, including a Premium WordPress Theme bundle! Full details below.


To get a shot at winning, just tell us what your plans are for launching new things in 2013 and share the link with your friends. The top 3 with the highest referral rate win.

Woah, cool idea. Now share your link with friends to improve your chances of winning the grand prize!

1) Fill out your e-mail address, name, and tell us what you plan on launching in 2013 using Launch Effect.
2) Share your link with friends*

*The winners will be determined by the number of people they refer. Basically, the people with the highest referral rate will win. So spread the word far and wide.

Winners will be announced via Twitter (@LaunchEffect) on February 1st, 2013. Good luck!

Both the grand winner and the runner-ups will walk away with a super soft Launch Effect t-shirt and a tattoo to match.

Sneak peek at what we’re launching in 2013 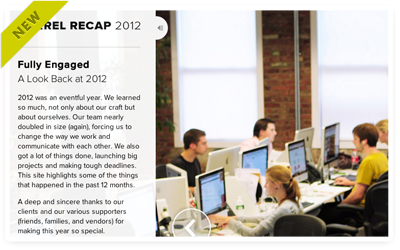 Next month, we’re releasing a new WordPress theme called DesignCub Portfolio Theme—a premium theme for visual storytellers. It’s for showcasing your work, photographs, or any big-picture story. At Barrel, the digital agency that brought you Launch Effect, we used DesignCub to make a recap site highlighting the happenings at our office last year: www.barrelny.com/recap/2012.

Rest assured, your email will never be shared with a third party. We'll only use it to notify you if you are one of the winners.
Also, the idea that you submit is entirely your intellectual property. In other words, we have no intention of stealing your million-dollar idea.